I had a sort of epiphany last night and I feel kind of silly because it’s like: Duh, Jenn! Seriously…duh.

Earlier this week a couple we are friendly with asked if D and I wanted to go to an event this Saturday night. I told her I needed to talk it over with D, but she was like oh I’ll just put you down. Um…okay. I was feeling pretty awkward about the situation and didn’t particularly want to go because the male half of this couple tends to get aggressive when drunk. By “aggressive” I really mean he follows me to the bathroom and starts groping me then doesn’t want to take no for an answer. It makes me extremely uncomfortable. Obviously. But otherwise I really like them.

So I was venting last night to our best couple friends about how I wanted to get out of it, but I didn’t want to hurt her feelings so I guess we would just go and blah blah blah. Our friends were basically like: Fuck that noise. Just don’t go. You aren’t comfortable with the situation so just tell her you aren’t going. I was like yeah but what reason should I give her, and my friend is like: YOU DON’T HAVE TO GIVE HER A REASON. And I was like holy shit…I don’t. I don’t have to give her a reason.

I felt like such a fucking moron for making such a fuss (in my mind) about hurting someone’s feelings and making up bullshit excuses, when really I should just be like: Thanks for the invite, but we have to pass.

So that’s what I did. And it felt amazing.

If you want to say no, say no. You don’t owe anyone an explanation about anything. These are things I tell my own friends, so why can’t I take my own advice? From now on, I will.

Thanks to Ann & Rob for being awesome…as always. 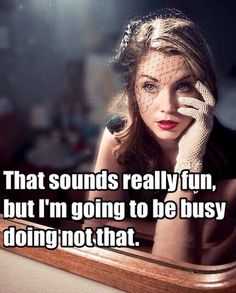